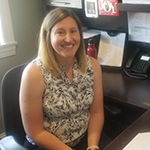 Born and raised in Oceanport, New Jersey, Katelyn came to the Cape in 2014 after graduating from law school. Katelyn received a Bachelor of Arts degree in Public Relations from the University of South Carolina in 2010 and her Juris Doctor degree from New England Law | Boston in 2014.

Katelyn joined the firm in December 2016 and is a member of the Massachusetts Bar Association. She is admitted to practice in state courts in Massachusetts, as well as the United States District Court for the District of Massachusetts. While Katelyn focuses on Chapter 13 bankruptcies, she also assists with the Chapter 7 bankruptcies.

In her spare time Katelyn loves spending time at Sandy Neck Beach and exploring the Cape. She lives in Barnstable Village with her husband and young son.

Tell Us Your Story

Get a Fresh Start Today

This law firm’s practice includes serving as a debt relief agency: the firm helps people file for bankruptcy relief under the Bankruptcy Code.